Trend Pyalara
The “Manarat: Pioneering Arab Experiences in the Field of Media and Information Literacy” conference. 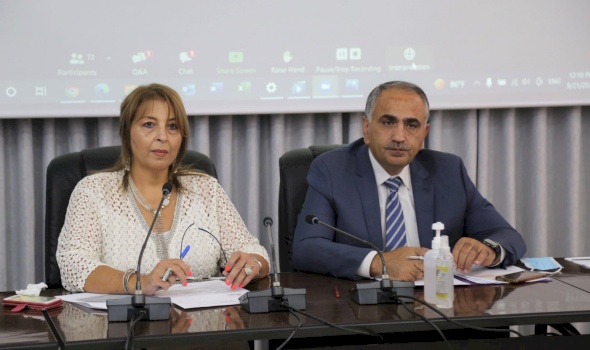 The Palestinian Youth Association for Leadership and Rights Activation- PYALARA, the Jordan Media Institute, and the Associations: Family and Child Protection in Jordan, Tunisia for Youth Media, "Dawa'er" in Lebanon and the Lebanese Jesus and Mary School, concluded the activities of the Media and Information Literacy Conference entitled: “Manarat: Pioneering Arab Experiences in the Field of Media and Information Literacy”, with the support of the Deutsche Welle Academy and the German Ministry of Development and International Cooperation.

The conference included sessions at the national and regional levels, with the participation of specialists and speakers from several Arab countries, in addition to reviewing success stories, initiatives and achievements in this field.

Among the participants: HRH Princess Rym Al-Ali, founder of the Jordan Media Institute, Prof. Marwan Awartani the representative of the Palestinian Minister of Education, Dr. Basri Saleh the Undersecretary of the Ministry, Ibrahim Melhem the official spokesman for the Palestinian government, Hania Al-Bitar the director-general of PYALARA, Jens-Uwe Rahe the head of the Middle East and North Africa department at Deutsche Welle, Neveen Mosleh the representative of the General Department for International Relations, and representatives of the Government Liaison Committee, which includes public relations and media departments in ministries and official bodies, and many interested parties, researchers and educators from various participating countries.

Where Princess Al-Ali emphasized that this conference represents an occasion to exchange ideas experiences at the regional level, especially in light of a digital society that requires possessing MIL skills and enhancing capabilities to deal with the requirements of the current era and what is produced by technological developments and the huge flow of information, and to verify its credibility and access to reliable sources. The Princess also reviewed the features of the Jordanian experience at the level of the Jordan Media Institute and the steps and unremitting efforts to consolidate the rules of media and information literacy at the level of schools, universities and partner institutions.

In turn, Saleh affirmed the ministry’s keenness to raise the voice of MIL, embody this approach in all institutions in a holistic manner, expand the circle of partnership at the level of these institutions, and move towards creating partnerships and alliances that establish clear visions, institutionalize all efforts and adopt a strategy that will serve future directions and aspirations. He also touched on some of the premises that intersect with the Ministry's vision and focus on the skills of the century, providing students with skills and competencies and moving forward to include the curricula with topics and concepts related to MIL, expressing his thanks to PYALARA, Deutsche Welle Academy and all partners, participants and organizers of this event.

In turn, Al-Bitar called for the necessity of investing the efforts that have been made for the purposes of spreading media and information literacy in educational institutions and the work that has been done with the rest of the groups and sectors, stressing the importance of targeting public relations and media practitioners in official state institutions as the interface of these institutions and the direct point of contact with their audiences.

On the following day, the conference included specialized and dialogue sessions on practical steps to combat the information epidemic presented by UNESCO Liaison Officer Hala Tannous, and a specialized team from PYALARA, based on the False News Guide prepared by UNESCO, while the second session was titled: “The impact of the information epidemic on the media and public relations in official institutions”. The regional session, which was titled: "Media and Information Literacy as a Global Skill for Life, and Official and Specialized Attitudes towards Media and Information Literacy".

The last session was entitled: "Regional Communication and Building the Media and Information Literacy Network", where the network was officially launched at the level of the Middle East and North Africa.

The conference included the presentation of documentary videos that include extracts from the MIL program, a review of regional experiences in this context, and interactive competitions related to media literacy concepts and issues.