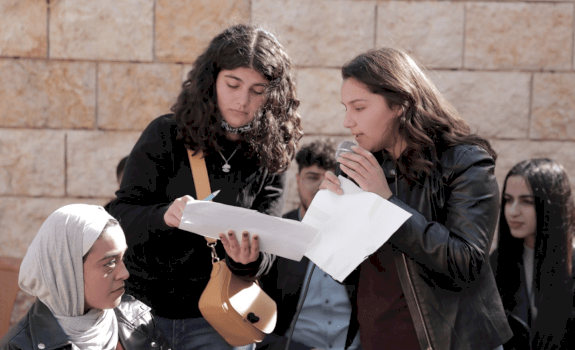 The Palestinian Youth Association for Leadership and Rights Activation- PYALARA- organized a number of field visits, including: the Independent Commission for Human Rights, the Palestinian Journalists Syndicate, and the Palestinian Center for Development and Media Freedoms "MADA", in which a group of media students from the Arab American University participated.

The visits aim to familiarize students closely with the nature of the work of human rights institutions, and to create partnerships between them and the student unions that PYALARA is working to establish.

In turn, Nasser Abu Bakr, the head of the Palestinian Journalists Syndicate welcomed the media students, pointing out that they are part of the journalistic body. He also gave a historical brief of the Syndicate, and the mechanisms it follows to protect the rights of journalists locally and internationally, stressing the importance of students' involvement in fieldwork.

Islam al-Tamimi, the Director of the Training Unit at the Independent Commission for Human Rights emphasized that the Commission is constantly working to monitor human rights in Palestine, receive and follow up complaints, and raise human rights awareness in various Palestinian laws and legislation.

Sherine Al-Khatib, the Coordinator of the Monitoring and Documentation Unit at the Palestinian Center for Development and Media Freedoms "Mada", explained the role of PYALARA in following up the issues of journalists, supporting them, contributing to limiting violations of media freedoms, promoting a culture of freedom of opinion and strengthening and developing the role of the media in the society.

This tour comes within the (Young Journalists As Defenders of Their Rights “Tawasul” ) project, which aims to create young leaders who are aware of their rights and duties, noting that the project is implemented in many universities in the West Bank and Gaza Strip.