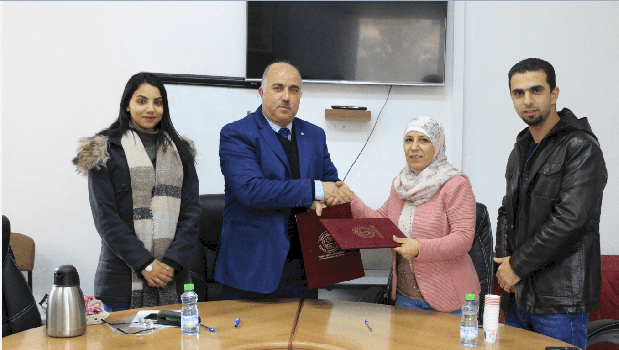 The Palestinian Youth Association for Leadership and Rights Activation- PYALARA signed a memorandum of understanding with Palestine Technical University - Ramallah Branch, as part of the (Young Journalists As Defenders of Their Rights “Tawasul”) program, which PYALARA implements in many universities in the West Bank and Gaza Strip.

This memorandum was signed by Dr. Murad Awadallah from the university, and Naila Hedaya, the Director of Tawasul program. In addition to the presence of Mr. Raafat Al-Haj Ali, the head of the media department and the training officer at the university, Yaffa Najajra, the field coordinator of the program from PYALARA. The memorandum comes in the context of strengthening the partnership with the institutions of the Palestinian academic sector.

In turn, Awadallah said that the partnership with PYALARA represents an opportunity for university students to practice union work, which helps them to engage in public life on the basis of knowledge of rights and duties.

Al-Hajj Ali also pointed out the importance of this partnership, as it enhances the opportunities for students to learn about media institutions and integrate them into the Palestinian journalistic body, in addition to the training and experiences they obtain in the academic and practical fields.

In turn, Hedaya pointed out the importance of involving media students in extracurricular activities, especially in light of the development of the media, and the space imposed by digital media on the process of exchanging information and the emergence of what has become known as the citizen journalist.

While Najajra indicated that the next step will include building the capacities of the targeted students, raising their awareness and knowledge of the importance of union work and its mechanisms, in addition to deepening their knowledge of the rights of journalists, the media law and codes of conduct, freedom of expression, and the role of the media in social change, in preparation for the formation of a student press union, similar to their colleagues in other universities.

It is worth mentioning that PYALARA is working on implementing the “Tawasol” program for young media professionals to defend their rights, in cooperation with the Palestinian Journalists Syndicate, and a number of media faculties in Palestinian universities in the West Bank and Gaza, with the support of the German “Bread for the World” Foundation, with the aim of forming unions for media students in partner universities, including Al-Quds Open University in Ramallah and Gaza, Birzeit, Al-Najah, Palestine Technical and Arab American Universities in the West Bank, and Al-Aqsa and Palestine in the Gaza Strip.